When is the best time to run? 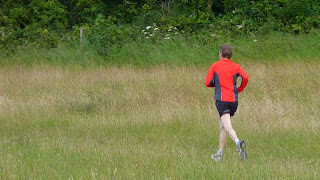 Knowing when the best time of day to run is an interesting question.  Like many simple questions the answer is sometimes a little more complex.  Here goes....


Many people who run are fortunate in having a choice and frequently people stick to what they know works best for them, perhaps without always knowing why it works.  For others it can be a case of grabbing a run whenever the opportunity comes along.

The big attraction of running in the morning is that it's a brilliant way of starting the day.  Somehow having a good run before the day actually gets going is forming a good foundation, getting the day off to a good start.  No matter what happens during the day, you've had your run and, in my view, are more likely to be able the stresses and whatever the day throws at me.  Myself, I think it can go further than just that.  I have "waxed lyrical" many times about the privilege of being the first to run through some cobwebs, or being out in the quiet of the day, before anyone else.  That can be a very special thing but not everyone will identify with that.

Running before breakfast is also a comfortable thing to do as I hate running with any kind of food in my stomach.  Last weekend I ran up to my Mother-in-Law's house which is just under 7 miles away.  With my Sunday lunch inside me it felt as if I was pregnant; twins at least!  That was seriously uncomfortable!  Going out before breakfast means you can have a "recovery" breakfast when you get back.  Fruit, fruit smoothies are ideal as these are full of antioxidants and these have a role to play in repairing the damage caused through training, as well as mopping up any free radicals.

It has been said that people who run in the mornings are more likely to form a long term habit of running.  Also, as there is likely to be less carbohydrates stored, you could be burning more fat than compared to other times during the day: for some, this could be a real attraction.

Another advantage is that you are more likely to sleep better the following night (I can vouch for this).

Chances are it will be the coolest time in the day too.

Probably the warmest, brightest and busiest part of the day which on the face of it may not be too attractive.  However, you've probably been active during the morning and your muscles will be a little warmer and this could reduce the risk of some injuries.  Also you are more likely to be well hydrated, which, depending on how far you are likely to run, will be helpful in keeping you energised.

For some it could be a chance to escape the office for half an hour; that running space could be a life-saver in stressful, difficult positions.  It might open up possibilities of interacting with work colleagues in a different manner - relationships, status, power, hierarchies could all change.

Although I haven't been off running at lunch time when I'm at work, I sometimes go for a walk and I find I concentrate better in the afternoon.  Following that through, I wonder if running would have an even better effect on my at-work performance.

Possibly a good time of day for unwinding, as a way of dealing with the stresses and strains of the day. Chances are your body will be working at it's peak and therefore performance could be at it's best.  Your aerobic capacity could be at its best and you'll be well nourished with plenty of glycogen based energy ready to fuel your run.

Evenings also tend to be popular times for other runners to be out and about, so it could be a more sociable time of day, especially if you like running with other people.  If you're in a running club the chances are you'll be having training runs in the evenings.

Whichever you choose
The important point is to get out there and run and I think it's worth experimenting with to find something that suits you, although much does depend on the routine of other family members as well.

For myself, it has to be the morning!  How about you?