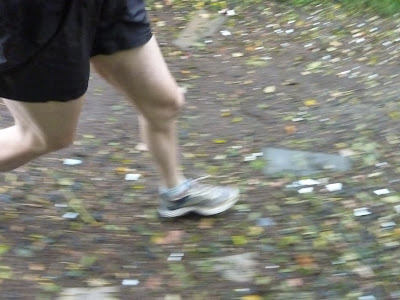 On a recent run I spotted a couple of other runners who were clearly in the early stages.  It made me smile as I remember being like that.  It got me thinking of a few tips for new runners:

Do buy some running shoes from a proper running shop.  Why? So you know what kind you need and lower the chances of being injured and then giving up before you have even started (almost like I did!).  How many times do you hear people say "I can't run because I have bad knees"?  Having the wrong shoes is a serious issue.  Just having a white pair of sports trainers with soft soles is not good enough.  Ideally you should find a shop that can carry out a gait analysis and be staffed by someone with some expertise.  If you can, get some socks at the same time following the recommendations by the shop assistant.

Don't bother with special clothing at this stage; you don't really need it.  That comes later, if you want the "look".

Do remember the immense benefits of running which can be amazing - physically and mentally.  Always good to bear this in mind if you're feeling discouraged.

Do you need to talk to your Doctor? Only you will know the answer to this but might be worth having a general health check at the same time - blood pressure, cholesterol etc.

Don't run too fast.  I fell into this trap and I think it is quite common.  I felt I had something to prove but just put this aside in your mind.  To get the pace right, you shouldn't be completely out of breath.  Instead you should be able to say a sentence at a time and maybe have a quick blast for a short while once or twice on a run.

Don't feel you have to run all the time.  If you are completely new to running or not in good shape, there is nothing wrong in starting out with a walk, then a jog for a few minutes, then walking again and then a gentle run for a minute or so before finishing with a walk.  Gradually increase the distances and times you spend running.

Don't take a water bottle as I don't think you need this, especially when starting out.  Instead have a drink beforehand and when you get back.  It is like carrying a sign which says "New Runner".  Even on my regular 7.5 mile runs I never think of taking a water bottle.  Don't worry about sports drinks either.  I don't believe you need these, unless you're covering long distances and need refuelling.

Do rest between runs - maybe go out 3 or 4 times a week, giving your joints and muscles a chance to become used to what you are asking them to do.  Try running every other day, this suited me in my early days.  Don't be discouraged if your legs feel a bit achy the following day: this is normal and a sign of your body repairing itself and becoming stronger.  Just make sure you build up gradually and (this is really important) you don't over do it!

Do plan your routes starting off with maybe half a mile and no more.  Gradually expand your range but avoid hills if you can at this stage (hills become welcome feature later!).  I valued running on something softer than concrete when my joints were getting used to the new strains.  Depending on where you live, try running on some grass, a beach or a dirt/gravel or a woodland trail, you'll find this less punishing.  Be careful if the ground is rough or bumpy.

Email ThisBlogThis!Share to TwitterShare to FacebookShare to Pinterest
Labels: running