The importance of saying "thank you" 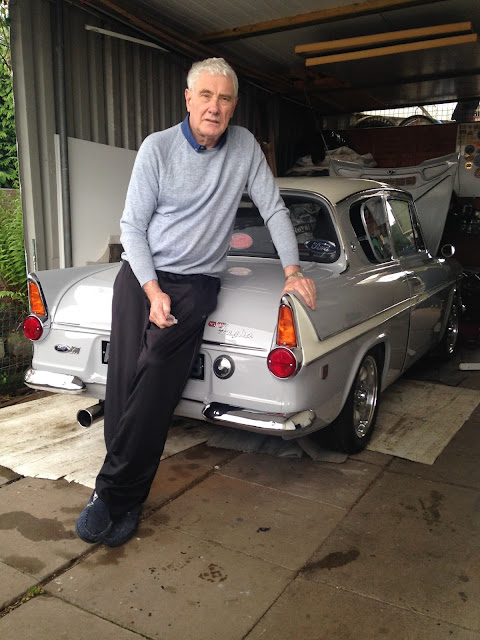 This is my friend Geoff.  We have known each other since the last century when I lived in Hereford and I recently paid him, his wife Lorraine and his collection of bicycles, a visit.  I had wanted to do this for quite some time but it was hearing a radio programme which made me do it for sure.
The radio programme was Saturday Live and it's broadcast each Saturday morning on Radio 4 (and I do like Radio 4!) and presented by the smooth talking Rev Richard Coles and Aasmah Mir.  It is a kind of chatty magazine programme which includes a section where listeners can phone in to say "thank you" to someone.  Often these are people wanting to express their appreciation for something which happened many years ago.  As they say on Saturday Live "it's never too late to thank someone".
The "thank you" which caught my attention was someone calling to thank a Dr Ivor Chance (yes really, this was his name).  The woman calling in said that she was only alive through the work of Dr Chance.  Apparently her mother was in Uganda, pregnant with her and went into a difficult labour, fortunately she was able to find her way to a remote mission hospital where Dr Chance was able to deliver her.  The labour was very difficult and the mother lost a lot of blood, so Dr Chance donated some of his own and therefore saved the life of the mother and the newborn baby.  Rolling forward many decades, it was time to say "thank you" to Dr Chance for saving her life as a newborn baby and her mother.
The remarkable thing about the story was [the late] Dr Chance's daughter was listening to the radio programme and was stunned to hear of her father being talked about on the radio.  So she contacted the Saturday Live programme and explained, the following week, how much she had been moved by hearing the account of her father.  It had also spurred her on to make a point of saying "thank you" to a number of people in her own life who had made some kind of impact or long lasting impression through friendship.
So that's why I decided to thank my friend Geoff for his friendship over the years.
The bonus was also being able to have a poke around his garage at his collection of bicycles, many of which I could remember.  You see, Geoff, appreciates nice bicycles and cars (he has restored the old Ford Anglia in the above photograph to a high standard).
I love the Moultons he has.  There's a couple which date back to the 1960s and what I think of as being a modern contemporary version which actually dates back to the 1980s - this could be an AM7 or 9 - this is my favourite.  There's also some Curly Stay Hetchins, a curious Flying Gate which I hadn't seen before and apparently the first one made by the frame builder.  A nice Dawes Galaxy, a titanium Raleigh MTB and the list goes on.  All lovingly restored and cherished.
I love hearing all the anecdotes about each of these projects; the stories in acquiring the bicycles (and cars) followed by the research and steps taken to restore them.  Sometimes it's a case of restoring something to the original factory condition, other times it can be appropriate to update or improve the original specification.  Each time this is done, there's always quite a bit of thought taking place to ensure it would be honouring to the original design and concept.
So, old friends rightfully thanked for their friendship; to admire the handiwork, to be nostalgic and reflect on where we've been in life.  As the years tick by, it's good to reflect on the lives that have touched my life for the good - right from long standing friends to fleeting acquaintances - these are all cherished and valued.

Email ThisBlogThis!Share to TwitterShare to FacebookShare to Pinterest
Labels: people